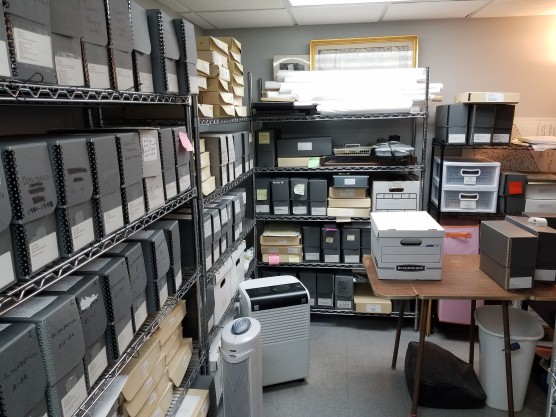 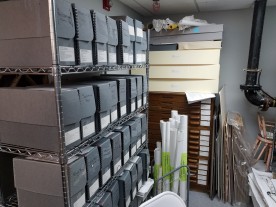 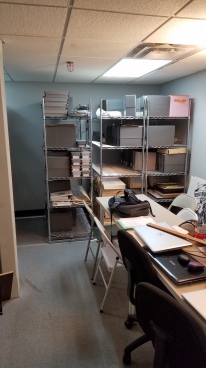 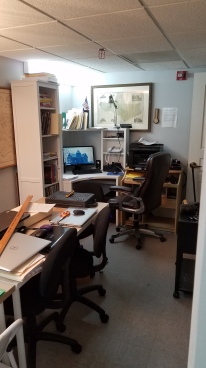 In our previous episode, shipments of new “stuff” were all off schedule, sending my poor soul into a tizzy. In the end, it was all a matter of logistics and good weather (or, more appropriately, bad weather) events.

So, last week I began the disassembly project. After emptying the shelves along the back wall and stashing the contents wherever there was space nearby, in the hallway, on the work table and in a moved rack behind the work table, and with rubber mallet in hand, I broke down the four back wall shelving racks. Initially I proposed painting the back wall space but the painters had others projects. Meanwhile, I spoke with the boss about removing the commode from the bathroom and capping the piping and he agreed to make the connection/arrangement with the plumber.

With the back wall cleared and the commode fixture removed, I had to take off my “archivist” hat and put on my “janitor” hat. Yeah, they never tell you that in library school either! But it was cool. You do what needs to be done.

Tuesday rain was predicted at 2pm. At 11 am we moved the map chart cabinet into the new storage room and removed the door off the hinges. At about 2:05, the bottom of the clouds opened up. I went back to the maintenance shed and had a tuna sub and chips with Butch and Frank, our town maintenance crew. By 3:00 the rain ended. Butch and Frank gave me the rest of the afternoon. They laid down the tracks and built the racks for the movable shelving system. By knockoff time it was all assembled!

Thursday my goal was to get all the archived boxes off the temporary racks and into the new shelves. I had a small cart that enabled me to move twelve boxes at a time. So it took multiple trips. Luckily I had created a move plan that identified where each section of the boxes would go in the new shelves. I got about 90% of it done by lunch time and dashed to the nearby Korean diner for the Thursday special, chicken teriyaki with rice and salad. When we arrived with our take out orders the Mayor was having an impromptu meeting at our normal staff lunch table, but she offered to re-locate.

At 1:45 my summer high school volunteers arrived. I had them finish half the remaining 10% of the move, which took them all of 45 minutes. Then I set them up inserting maps and architectural drawings into the new cabinet in the new storage room and labeling the contents of each of fourteen drawers. I finished the remaining 5%, then set upon the task of arranging the contents on the shelves by accession number, frequency of use, and function (all three. This is the big difference between librarian-thinking and archives-thinking. So many more degrees of freedom!).

It was a full day. I was thrilled when 4pm finally arrived!

This site uses Akismet to reduce spam. Learn how your comment data is processed.